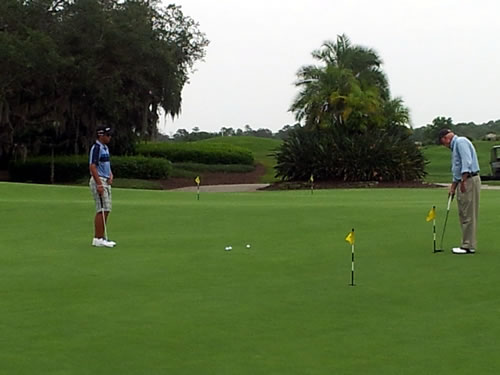 Frank and Andy Zhang preparing for US Open

Fourteen year old Andy Zhang qualified for the U.S. Open at The Olympic Club in San Francisco, becoming the youngest competitor to ever qualify.

A student of the Putting PAD at Reunion Resort in Orlando, FL, and taught using the principles contained in the Certified Putting Instructor Course, Andy visits regularly for putting lessons, and even before his success in making it through the local and sectional qualifying to be an alternate, he was one of the most promising youngsters Frank had ever seen.

“When I first met Andy he was putting with a long putter. In time, together we decided it would be best for him to switch back to a regular length putter. We have been tuning up his stroke every week and working on the fundamentals. The confidence he has developed on the green has spilled over to the rest of his game. He is one of the best young golfers in the world today.”

Andy received a call from the USGA after Paul Casey withdrew from the U.S. Open with a shoulder injury. He played a practice round with with Bubba Watson and Aaron Baddley and made history teeing it up on Thursday at 8.21am PDT with Hiroyuki Fujita and Mark Wilson.

After 36 holes, Andy was T-7 in putting, a fantastic statistic, given the difficulty of the greens and the overall situation he found himself in.

“We wish Andy all the best for the exciting future he has ahead of him. The U.S. Open was the experience of a lifetime and we are all extremely proud of his accomplishment”, said Frank.